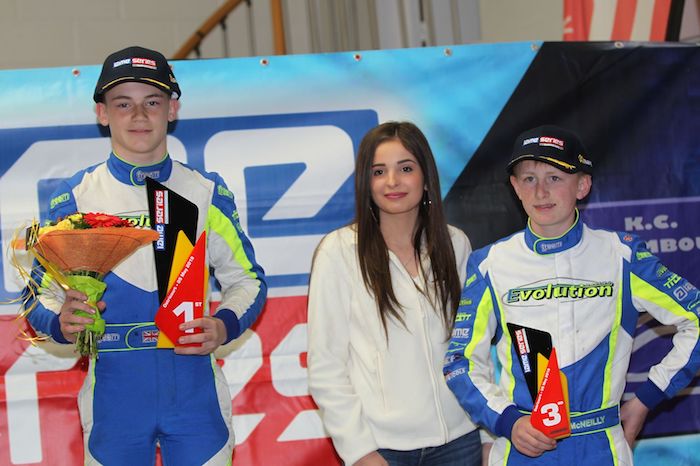 The X30 Junior class turned on some close racing, but it was Team Evolution who eventually dominated the winners’ podium in France. The UK duo of Liam McNeilly and Zach Ripley fought hard for the leading positions, as the weather changed constantly to keep it interesting during Saturday’s races. McNeilly took a win and second place in his heats to be starting on pole for the final Sunday, yet the 13-year old from Essex fell back in the order after having the lead early on. However, it was Team Evolution’s Zach Ripley coming from grid position 5, who pushed hard to steal the honours in the final clash following his two great top 3 results in the races a day earlier. It was an impressive finish for the 14-year old Kent junior to take his first win with the team, while McNielly claimed the last step on the day for his first rewarding podium at this level of racing. 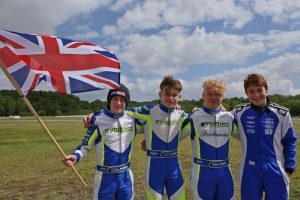 Zach Ripley – “It was a very good weekend with good pace; although we could have had a bit more speed after losing our better race engine in the lead-up, but even with the weather changing from wet to dry, the set-up and the feeling was good. I’m pretty happy considering it was a tight race, so we just need to keep pushing now and go for the win the championship.”

Liam McNielly – “Our weekend was great, taking first and second in the heats to be on pole for the final, with some really close racing and a podium finish. I enjoyed this track because it is fast, more open and quite technical, but it was always going to be tough having a lot of fast drivers around me. We came into the championship in third, so this result is good for the series points.”

Christian Lilley made his debut with Team Evolution in X30 Junior, showing encouraging progress on the 1.450 metre challenging circuit in Northern France to end up on P12 in the class final. 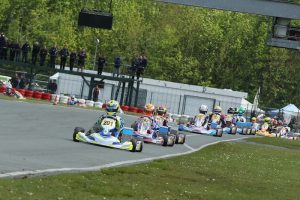 The defending Benelux champion, Joey van Splunteren, cruised through the initial stages of the weekend in Ostricourt relatively unchallenged. The Dutchman qualified on pole position in the field of 56 entries, claiming what he referred to as “easy victories” in all three of the heat races. Unfortunately, utilising the optional new tyre in the final meant the International Open winner could only manage to take third at the flag, but gained valuable points to advance in the overall championship standings going into round 3 next month.

Joey van Splunteren – “I was leading all weekend and it was actually easy. We had done it well without any bad luck, a perfect qualifying and won all three heats. The option was there to use a new tyre for the final Sunday, but from the start of the race the kart was just sliding. I was going crazy! If you lose because of a good fight for places, it’s not so bad. But I don’t understand what happened really. Luckily, I could manage to keep my position and not fall behind my teammate Niels and the other drivers closing in. I just had no speed… but, that’s racing! Anything is still possible in the championship this season with three rounds to go, so I will do my best to win.” 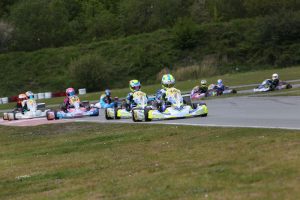 Still with the X30 Senior line-up, Niels Koolen continued to display good form after the podium finish at the opening edition of the 2019 European X30 Series in April. With a top 3 result in his last heat that helped promote the 17-year old to start on grid position 9 in the final, Koolen drove well to take P4 at the Benelux event. His Evolution teammate Alfie Prince was on track for a clear top 10 result, but fell out of contention due to a last lap incident, while Yarne Goovaerts overcame similar hurdles throughout the weekend, still progressing with good pace and gaining positions.

Team Evolution Manager, Ashley Whitcroft – “This weekend has been another strong one for our team. The conditions were very difficult Saturday with the ever-changing weather, but the results were again exceptional. To have four drivers inside the top 4 in both categories is great! Thank you to our valued partners and everyone involved with our team who support us.”

The 2019 IAME Benelux Series crosses the border and heads to the beautiful location of Spa-Francorchamps in Belgium at the end of June for round 3.

– We work with drivers from the early stages of their racing career and develop their skills, enabling them to compete at the forefront of European and World championship level of karting.

– We have a great team moral with outstanding staff which creates the perfect platform for success. A real family atmosphere helps keep the drivers relaxed during their time with the team. – We also work closely with the engine tuner Grice, allowing us to maximise engine performance.

– Unlike most teams, we work with two chassis manufacturers – Kart Republic and OTK.

Various Club Races in the UK

Photos are free for media use. *Hi-res photos available on request.

Challenge Of The Americas gearing for return to the track