Home Events CRG IN SARNO FOR THE FINAL SPRINT OF THE WSK SUPER... 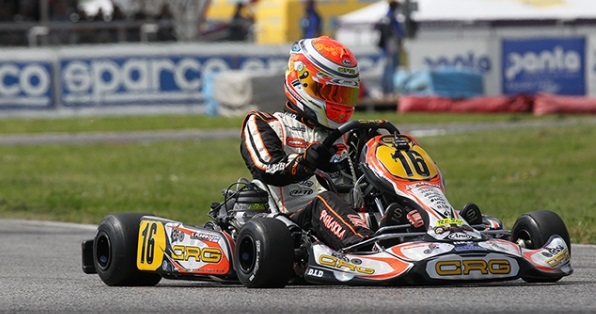 PRESS RELEASE – TKART – The WSK Super Master Series will resume this coming weekend from the International Circuit Napoli of Sarno with the fourth and final round. Puhakka is among the leaders of KZ2, Tiene and Hiltbrand of KF, while Hauger is chasing the title in 60 Mini.

Just one week after the European Championship held in Sarno, the same International Circuit Napoli will stage the fourth and final round of the WSK Super Master Series, event where CRG will have great expectations in all categories.

DIFFICULT, THOUGH NOT IMPOSSIBLE,  MISSION IN KZ2
The attention is focused mainly in KZ2, with the Finn Simo Puhakka projected to the top part of the classification after the triumph at La Conca of Muro Leccese on the CRG Black Wheel chassis pushed by the new and powerful Maxter MX-S engine. The double win obtained in the Prefinal and Final at the most recent round launched Puhakka to the third place of the classification, at 104 points to Adrigò but only 19 short of Abbasse. The overtaking move is going to be quite difficult, but still not impossible as math still allows it. Some further 140 points are up for grabs as regulations award increased scores in the final round.

Beyond the final classification, CRG drivers will be called to a bold performance. This is the objective that will bring on track Paolo De Conto in KZ2 who has been great in the first part of the event in Muro Leccese before being excluded from the final by a contact. Davide Forè has also been very quick and Fabian Federer displayed a great in the recent European championship, while the young Fabrizio Rosati is quite keen to come to the fore.

TIENE E HILTBRAND READY FOR THE CHALLENGE IN KF
After shining in KZ2 at the recent European Championship of Sarno, Felice Tiene and Pedro Hiltbrand will be back to KF, joining Archie Tillett, all on Gem Star chassis. Tiene and Hiltbrand put in a great race in KZ2 at the European Championship as they both got on the podium at the end of two stunning recovers: Hiltbrand eventually took the second place in the Final after the 47th time in qualifying due to a technical problem. In other words, nothing is impossible…

HAUGER CHASING THE THIRD TITLE IN 60 MINI
In KF Junior and 60 Mini, team Gamoto will get to this round with good perspectives for CRG colors. The team led by Gatto will field Muizzuddin Musyaffa Bin Abdul Gafar on CRG KT2 chassis in KF Junior, while in 60 Mini the CRG Hero chassis will be operated by the Norwegian Dennis Hauger who will have good chances in the championship, thanks to his 80 points lead in the classification. The classification is still sub-judice though, due to an appeal filed after the past race, but Hauger will have the chance to end the championship on a high, after winning the only round of the WSK Gold Cup and the WSK Champions Cup run in two rounds.

All results will be available at www.wsk.it