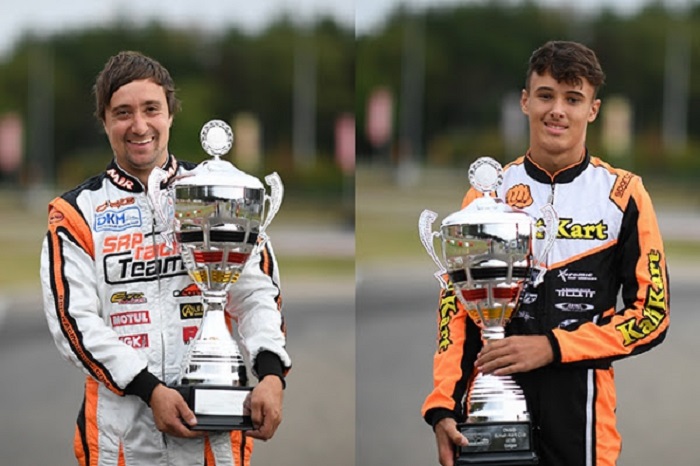 The German Championship DKM ended with the fifth and closing round held in Genk (Belgium). CRG hauled another great result with the double victory of the KZ2 title with Fabian Federer, on CRG-TM-Vega run by Team SRP, and with Emilien Denner in KZ2 Cup, who competed for CRG Holland on Kalì-Kart-TM-Vega.

The result obtained in the 2018 DKM campaign by CRG has been rounded off by locking out the top three of the final standings of KZ2. Behind Fabian Federer, who totaled 221 points, six times winner of DKM with CRG Jorrit Pex came second one point short of the winner, while his brother Stan Pex was third at 197 points.

KZ2. The new KZ European Champion of CRG Jorrit Pex won both KZ2 finals on the circuit that will house the World Championship next September 9th. Stan Pex was third and Fabian Federer sixth in the first final. Another win was claimed by Jorrit Pex in the second final, but Federer was third and secured the title by just one point on his team mate. Stan Pex had to retire from the second final instead. Among the other CRG Holland drivers present in Genk, Jean Luyet put in a good performance ending Race1 in 10th place and Race2 in 11th, Enrico Prosperi was 17th in Race1 and 19th in Race2, Benjamin Tornqvist 19th in Race1 but did not finish Race2, while Andrea Johansson was 26th in Race1 and 21st in Race2.

KZ2 CUP. In KZ2 Cup, category set up in 2016, Emilien Denner met the managed to win both finals and take the title on Kalì-Kart. Following the unlucky round of Kerpen, where the French driver could have grabbed the title early, this time around in Genk Denner has been spot on: pole position, victory of both qualifying heats and both finals. Hats off!

Among the best CRG drivers in KZ2 Cup, the Germans Davids Trefilovs and Patrick Kreutz got on the five-place podium in Genk ending Race1 respectively in P2 and P5. Kreutz was third in Race2, while the other German Christopher Dreyspring was fifth leading a CRG lot made by Tim Mika Metz, Marvin Langenbacher and Mark Potman. Thomas Neumann claimed fifth in the final standings.

Complete results are available at www.kart-dm.de/en/home/.

CRG in fight for the title of all categories at WSK...

Kas Haverkort stays optimistic after a challenging weekend at the DKM...