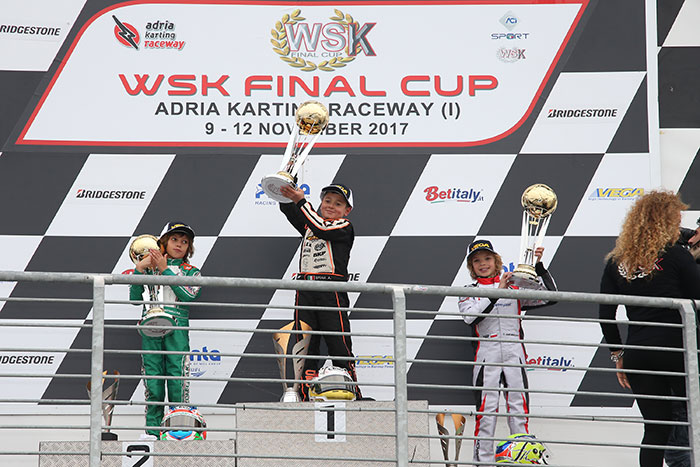 In the second and closing round of the WSK Final Cup held in Adria, young Spina claimed a great victory in 60 Mini. Giardelli was eighth in KZ2 after a good qualifying. Next round in Las Vegas with CRG Nordam drivers.

The double round of the WSK Final Cup reached its conclusion in Adria. An important win handed the very young Alfio Spina the led of 60 Mini classification with team CRG Gamoto.

After missing the victory in opening round held on November 5th, when Alfio Spina had a racing hiccup in the closing meters of the 60 Mini’s Final that relegated him to P5, Team Gamoto’s driver managed to bounce back brilliantly on CRG-Tm in the second round held on November 12th winning a spectacular Final and gaining the classification lead. Among the very young drivers of Team Gamoto, the Spanish Miron Pingasov was seventh in the closing race and tenth in the final classification, while the American Akshay Bohra experienced some troubles in the Final ending 20th due also to a time penalty.

In KZ2, Alessandro Giardelli was eighth on CRG-Tm after the promising fourth place in Prefinal and a good qualifying ended in P5. Emilien Denner was ninth right behind Giardelli on Kalì-Kart-Tm.

Andrea Rosso ended 21st in OK on CRG-Parilla recovering from the back of the grid due to a penalty he was given in Prefinal and to a troubled qualifying. Leonardo Bertini Colla was the best of CRG drivers in OK-Junior taking P11 on CRG-Parilla. Mathias Torreggiani closed his effort in 22nd place, while the American Nikhil Bohra, at the debut in 60 Mini, is learning the new category and managed to be among the finalists in Adria, but was eventually forced to retire with one lap to go. The Brazilian Gabriel Bortoleto had a very difficult weekend. He retired early on in the Prefinal that he started from a promising fourth place.

The next appointment will be the 21st Skusa SuperNationals in Las Vegas next November 19th with CRG Nordam drivers led by the winner of the past two editions Paolo De Conto.

ROK CUP International Final: the path of the 5 champions

It is time for the great show of the ROK Cup...

WSK Final Cup: the situation after the Heats