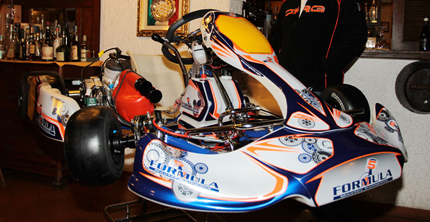 The former Formula 1 driver, who conquered his first national karting title precisely with CRG, was invited to the annual award giving ceremonies held on December 16th. All in “black,” the drivers who left a mark on the track in 2011 received their awards in front of an audience of 200 guests: Thonon (again) wins the CIK-FIA World Cup KZ1, Federer is the CIK-FIA European champion in KZ2, Max Verstappen triumphs in the WSK Euro Series KF3 and Mirko Torsellini gets 1st place at the WSK Final Cup, just to name a few.

CRG also announced the arrival of a single-brand competition based on the new Maxter engine, that should kick off in Italy precisely in 2012:  Formula 5 is the name of the kart that will race with this particular engine that can be used with either 6 speeds or, with a small modification, with 4 (with 27 HP instead of 40) – a solution that will allow also the youngest of drivers to do some top racing and will let everyone train even on smaller circuits. Some good news for an evening that, de facto, opens CRG’s 2012 season.