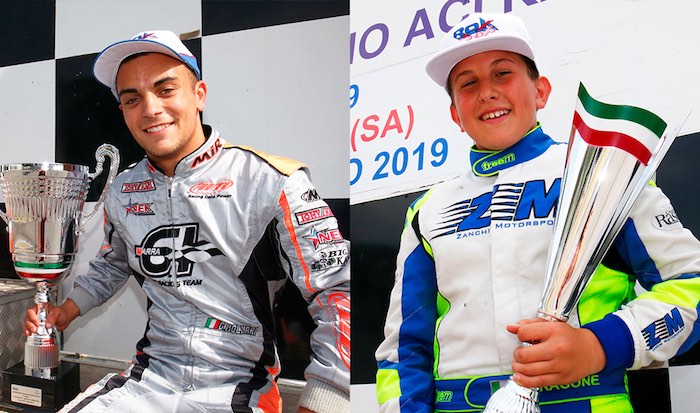 The violent weather that Italy has experienced has been felt at Adria, imposing rain tires for the second race, Junior and Senior, and for Sunday races. The Senior’s second race was played with mixed tires, rain and slick, with some riders choosing for the sculpted tires and others for the slicks. The riders started with the dry tires to be right.

SENIOR ROK. MONCINI AND BERNARDI WIN. MOLINARI IS A CHAMPION
Cuman on the dry track shows that he has something more than his rivals and makes his pole and first race his own. When on Saturday afternoon the rain floods the Adria Karting, Molinari and Moncini play for success until the last corner, closing in this order. Cuman, with third place, secures the first position in the race-1 grid flanked by one of the title aspirants, Molinari.
The other contenders for the title, Moncini, Locatelli and Biagioli, have alternate events. Moncini disputed two excellent heats, finishing third ahead of the increasingly convincing Bernardi.
Classification leader Locatelli cannot keep up with the very top and takes seventh place. Even worse is Biagioli, a victim in the first round of an excess of heat from an opponent who forced him to retire, relegating him, in fact, to the back of the group.
Race 1, run all in the rain, relaunches Moncini in the overall standings, which wins and returns in the wake of Molinari and Locatelli in the race for the title.
The place of honor makes her his Cuman, who resists the final attacks of a Cordera in great shape that recovers on Molinari and Bernardi, taking a well-deserved podium.
The other contenders for the title, Molinari and Locatelli, finish fifth and sixth, while Biagioli, fourth before the Adria round, is out of the race and from the championship.
Race-2 is made particularly exciting by the conditions that precede the start, with the track almost dry and the conductors approaching pre-grid. At this stage the choice was charged with pathos for the three Rokkers in the running for the title. Molinari and Moncini opted for the rain, while Locatelli mounted the slicks.
The right choice turned out to be that of the dry tires but Locatelli stopped immediately (spin and subsequent contact) without being able to take advantage of the strategic choice. While the three with the slicks, Bernardi, Cardamone and Biagioli, flew towards the checkered flag, Molinari and Moncini challenged each other with the rains in a melee that was worth the title. On lap six Moncini raised the white flag, parking his kart on the track and for Molinari the final part of the race was a simple formality. Molinari was leader of the classification already on the eve of the start of race-2 and, thus, he limited himself to administering, finishing in sixth place.
Sisti “won” the race of those who started with the rains, finishing fourth, behind the three with slick.
The victory was played by Cardamone and Bernardi, two very fast outsiders, and in the end the first victory went to Bernardi.

JUNIOR ROK. THE FIRST OF A WOMAN ON THE DAY OF RAGONE TITLE
Ragone dominated the qualifications and the first heat while in the second heat the rain overturned some balance and the very young Donno was projected to the fore. The latter is very good at battling with Ragone and Colombo without getting nervous and has won heats and front row alongside Ragone.
Race 1 started under the sign of Ragone who took the lead and ran away at a distance from Colombo and Zaffarano. It was Zaffarano who gave birth to a furious comeback, after an initial spin, which led him to take the lead of the race, crossing the finish line in front of everyone.
In the post-race, the muzzle out of Zaffarano, gave Ragone the highest step of the podium and the fifth consecutive success. With the fifth victory Ragone celebrated in the best way the title of Italian Champion 2019.
Zaffarano, after being penalized, slipped into the place of honor in front of Colombo, author of a queue at the last corner that deprived him of victory.
Race 2 allowed Donno to redeem himself after the fortune accused in race-1. The very young Rokker was confronted, first, with the new Italian Champion Ragone, then with Zaffarano and managed to escape towards the first affirmation of prestige.
Zaffarano concluded with another second place that left him with a hint of bitterness, given the performance shown throughout the ACI Championship.

Opening of registrations to the first 2020 WSK events