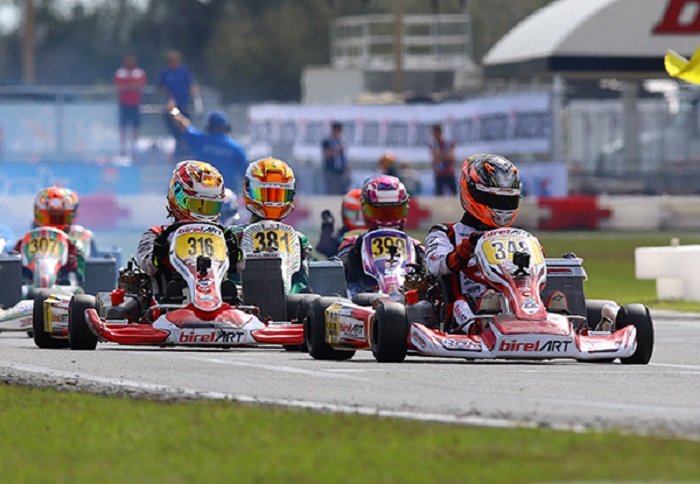 The ROK Winter Tour Championship took place in Ocala, FL last weekend where Birel ART was able to succeed in some of the most competitive categories. The ROK Vortex engine has been a reliable, affordable package providing fair racing for all drivers, in addition to being an easy product to maintain.

In ROK Senior, Ryan Norberg swept the field clean setting the fastest laps in almost every session on track. Ryan MacDermid had an impressive run staying in the top 5 and eventually claiming a podium (P3) in the final. Ryan Norberg would take a convincing win in the main, further securing his ROK Championship lead. ROK Junior pilots, Tom Nepveu and Mac Clark (Prime Power Team) would fight hard in the final event on Sunday, but eventually would both settle for a P8 and P12 respectively. Both drivers are working hard at each race to improve their race craft and skill set.

The ROK Shifter category saw the likes of Kremers, Simoni, Greco, Taurino, and Legrand make their moves in the competitive six gear class. Kremers, however would be the protagonist after leading 25 laps of the 28 lap final, was pushed off to finish P4; an unsportsmanlike move by the competition. And in the Masters Shifter class, a long time PSL driver and friend of the team, Michel Legrand was able to achieve a strong P3 podium aboard his Birel ART chassis.

Dominic Labrecque, President Birel ART N.A. – “This weekend was challenging like any other race weekend, but the determination of the team and our drivers allowed us to have maximum success.”

Coy Arbour, Team Manager Birel ART N.A. – “We were happy with the results, as we are seining development and improvement from our Junior drivers every race meeting. I’d like to thank all our partners, partnering teams, suppliers and families for their continued support.”

NF Sports enters a star list of drivers in 2019 Florida...