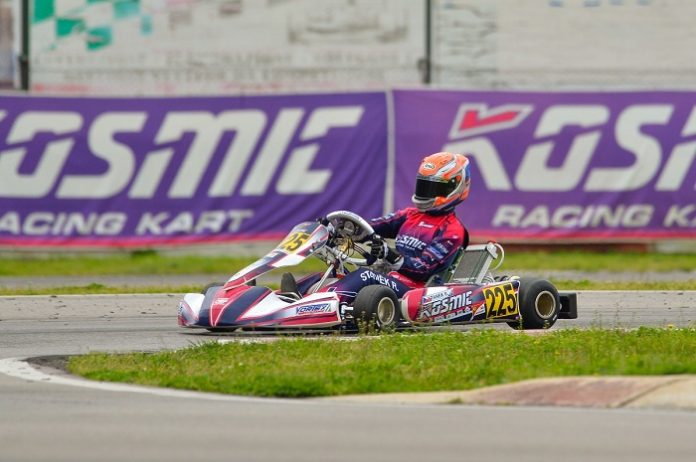 The Kosmic Racing Department’s drivers penalized by the weather conditions on the occasion of the second round of the WSK Super Master Series.

From Muro Leccese to Sarno, the WSK Super Master Series is heading towards its own end: after the round held on the track of La Conca, in fact, the spotlight was focused on the recovery of the second round originally planned in Lonato which saw the engines warmed up on the Naples International circuit.

Our Kosmic Racing Department’s drivers, even though penalized by bad luck and variable weather conditions on Sunday, have been able to highlight the potential of their Mercury S chassis powered by Vortex engines.

In OK class, Roman Stanek stood out for the best time in the qualifying (57”362) and for a victory in a heat which allowed him to reach the third position after the qualifying. In the prefinal, however, he must stop, vanishing all his efforts and preventing him from taking part in the Final. Viktor Gustavsson was the author of an excellent performance finishing his race in the Top 20.

In OKJ David Hadrien began the weekend of Sarno with a very good placing in the eliminatory heats. A bad outcome during the heats forced him to perform a comeback which gave him a promising second place in the prefinal. Even the French driver was not lucky, he actually had to withdraw in the decisive moment of the final, while battling for the very first positions.

Rafael Camara (OKJ) and Jules Caranta (60 Mini), have certainly experienced on one of the fastest tracks in the 2018 calendar, which will continue again on the International Naples circuit of Sarno on the weekend of April 5th-8th with the last WSK Super Master Series round.

23rd Winter Cup at the end