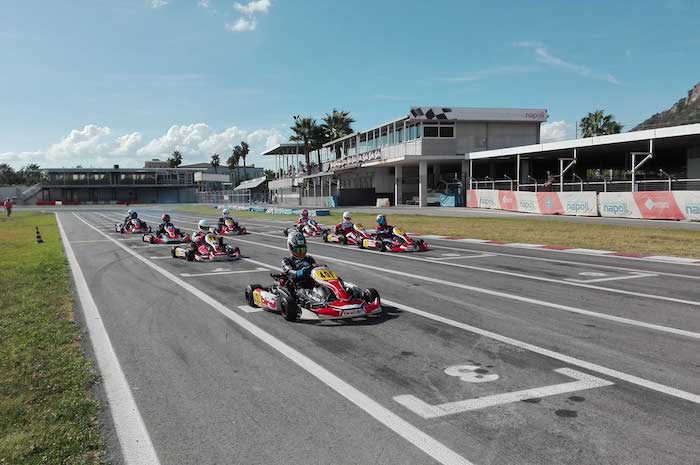 Karting in Sarno with the 14th edition of the Competing Cup. On Sunday, the official race with the National categories of AciSport and above all with the international presences in the Rotax classes that will compete in the world event of the Austro-Canadian manufacturer that once again chose the Campania circuit for its Grand Finals. Appointment in the second half of next October.

In the tests and during the week many pilots. For the official competition of the Competing Cup instead 70 riders on the track.

The race direction has created for the event 6 categories or classes that have competed in free practice sessions, timed trials and in the two races as PreFinali and Finals. Together therefore the National classes and of course the Rotax motorized classes.

The lap around the Naples International Circuit, measures 1547 meters.

Prefinals and therefore, start of the races. According to the numbering adopted for the timed tests, in class n. 1 wins confirming the performance of the pole, F.P. Scognamiglio (Iame X30 S); class n.2 (60Mini + Rotax Mini) with victory to P. Tizzano (Parolin / Tm) in 60Mini and poleman T. Snyman in the Rotax Mini; in the No. 3 class victory to X. De Ruwe (BirelArt / Rotax DD2); class n.4, and victory to V. Carofano (CRG / Modena – KZN U); in class 5 wins S. Sarno (TonyKart / Tm) and the amazing pre-level of the Entry Level, class No. 6 with the first to the checkered flag G. Piccolo (Italcorse / Lke) that starts chasing family victories also occurred here at the Naples International Circuit.

Final stages with the Finale races. Class # 1 over 14 laps saw the ruler of the whole weekend as winner, namely F.P. Scognamiglio (Iame X30 S) with third on the podium, the first Rotax motorized driver or, the Czech T. Babickova. Between the two, second, C.V. Colucci. Class n.2, with the final on the 9 laps saw the South African T. Snyman first for the Rotax Mini while in the 60ccMini National Team, victory went to P. Tizzano. Class n. 3 (Rotax DD2) on 14 laps, victory for the Slovenian X. De Ruwe. Class n.4 with his spectacular 14 laps again, went to V. Carofano (KZN Under) and to A. Sebastiani (KZN Over). Class n. 5 (125KZ Gentleman) with the victory in solitary for S. Sarno and to conclude, class n.6 or the Entry Level with the victory after 7 laps for G. Mabilia.

Next meeting in Sarno for Karting, from 19 to 26 October, Rotax Max Challenge Grand Finals.

270 verified drivers at the grand final of WSK Super Master...

Very different fights in all the classes for the 1st round...