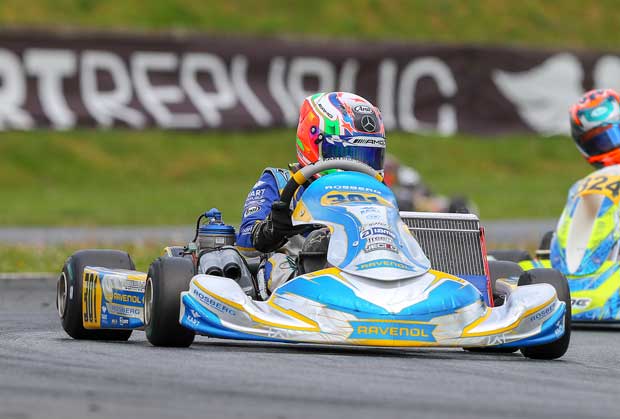 Andrea Kimi Antonelli has taken his first victory in the WSK Euro Series in OKJ class. The Rosberg Racing Academy driver originally finished second, but a post-race penalty to the original winner, Jamie Day let the Italian step up to the highest place in the podium.

Thomas Ten Brinke (FA Kart/Vortex/Vega) was the one who dominated in the manches and today did the same in the prefinal. Dutch driver was untouchable despite the small gap that he managed to hold on with Robert de Haan (Energy/TM Racing/Vega).

The final started with the same Ten Brinke keeping the lead in front of Jamie Day (Exprit/Vortex/Vega) who made an amazing start from 6th place to second.

As the final laps arrived, Day was overtaken by Ten Brinke in the penultimate lap, and then Day again retook the lead while in Ten Brinke drop to 7th place.

But a post-race investigation put a 3 seconds penalty to Jamie Day for causing a contact and forcing Ten Brinke off the track. Therefore, the race victory related to Andrea Kimi Antonelli, with De Haan second and Van Hoepen third.

In the driver’s standings, Robert De Haan leaves Angerville with the championship lead with 116 points, second is Thomas Ten Brinke with 105, while Antonelli and Bedrin follow them with 103 and 100 points, respectively.

The next round of WSK Euro Series will be at the classis South Garda Karting at Lonato, from 20th to 23rd of June.

Double victory at Sarno for Parolin

At Adria the winners of the Race-1 finals for the Italian...