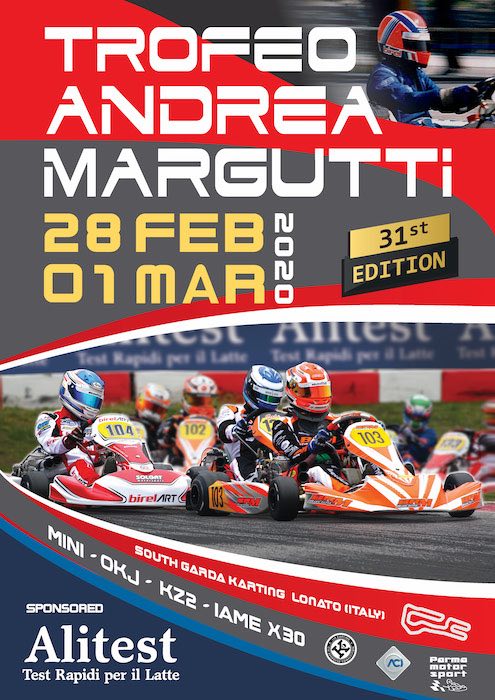 The “Andrea Margutti” Trophy continues to honour the memory of the young karting promise Andrea Margutti with the 31st edition of the event that started back in 1990. The 2020 event will take place as usual at the South Garda Karting Circuit in Lonato on February 27th – March 1st with the organization by Parma Motorsport. Entry lists to open on February 3rd.

The event is part of the International FIA Karting calendar and will feature the following categories on track: MINI International 2020-2023 with FIA Karting technical regulations, OK-Junior, KZ2, Iame X30 Senior and, for the first time this year, X30 Junior. Such a  great entry list envisages for a top class technical and sporting spectacle. Panta will be the official fuel provider, while the tyres providers are reported below.

Capped subscriptions will open on February 3rd and will close on February 21st with entry forms available at www.trofeomargutti.com. A total of 72 drivers will be allowed for MINI, while the cap is set to 54 drivers for categories OKJ, KZ2, X30 Senior and X30 Junior.

The event that celebrates the exceptional “1990-2020” anniversary with the organization by Parma Motorsport, has become a traditional and unmissable appointment for all the protagonists of International Karting. The historic hall of fame of the  “Andrea Margutti Trophy” was opened by Giancarlo Fisichella (winner of 100 ICA) and Andrea Belicchi (winner of National 100) in 1990. Fisichella secured other wins also in 1991, 1992 and 1994 and, after him, a lot of champions put their name on top of the standings over the years. Max Verstappen’s mum Sophie Kumpen, has been a strong karting racer and won edition 1995 of the most powerful category back then, Formula A. Among the big names that were excellent winners of the trophy, Robert Kubica (1999) and Daniil Kvyat (2009), but several other karting champions claimed the trophy. Remarkable were the participations of 5 times Karting World Champion Danilo Rossi and other big names like Jarno Trulli, Jenson Button, Vitantonio Liuzzi, Fernando Alonso, Giorgio Pantano, Kimi Raikkonen, Nico Rosberg, Lewis Hamilton, Nico Hulkenberg, Jules Bianchi, Antonio Giovinazzi among the others.

The most recent winners in 2019 were Joel Bergstrom in 60 Mini, Theo Wernersson in OKJ, Leonardo Bertini Colla in OK, Emilien Denner in KZ2 and Edoardo Ludovico Villa in X30 Senior.

Great spectacle and a lot of rain in the first round...

The first round of the Autumn Trophy on October 1st

Karting gets the go-ahead from the authorities