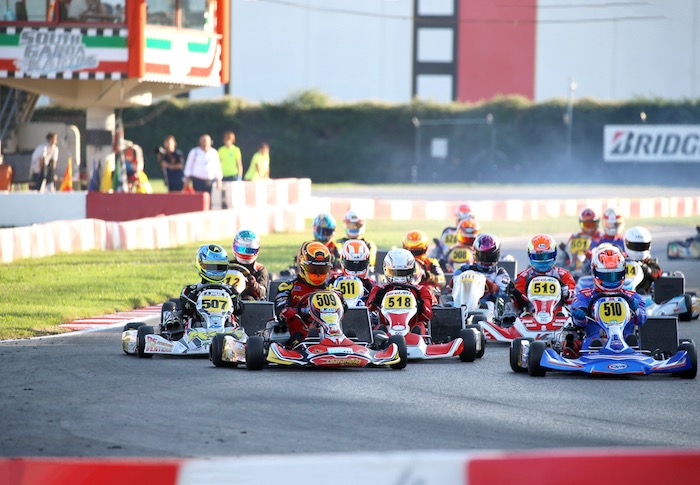 At the South Garda Karting, as many as 301 drivers highlighted another record for the Lonato track with the 29th Autumn Trophy, in the first of the two events of this traditional end-of-season event that will take place next Sunday in the final on 5-6 October will see the awarding of absolute prizes.

Meanwhile, this first test of the Autumn Trophy has had the task of also assigning the 2019 titles for the Regional Championship ACI Karting Lombardia-Piemonte-Valle d’Aosta-Liguria, and also for the final classification of Iame Series Italy X30. To complete the event the 100cc historical karts of the KFA Nations Cup.

KZ2. In KZ2 Massimo Dante (Maranello-Tm) managed to establish himself at the end of a spectacular final and after having succeeded in bending the competitiveness of William Lanzeni (CKR-Tm), author of the pole position and victory in the pre-final. During the last lap Lanzeni also lost his second position to team-mate Michele Fontana. The performances of Manuel Cozzaglio and Alessandro Ruggeri are also good, both on BirelArt-Tm with the Vzeta Racing team, finished in fourth and fifth position, as was Roberto Cesari on Top Kart-Tm who finished sixth and set the fastest lap. With the seventh place, Alessandro Buran concluded, on VRK-Tm, that with this result he secured the title in the ACI Karting Regional Championship. Second was Lanzeni, third Colombo.

60 MINI. In the 60 Mini it was the foreign pilots who got the better, led by Alex Powell (Energy-Tm) winner of the Final, ahead of the Bulgarian Nikola Tsolov (Parolin-Tm) and the Thai with Italian license Enzo Tarnvanichkul (parolin-Tm). The first of the Italians, Enea Frey on Tony Kart-Tm, placed fourth. Following on the finish line of the Final another group of foreigners, with the Austrian Kiano Blum (Parolin-Tm), the Chinese Chi Zen Rui (Energy-Tm), the Slovenian Aleksandra Bogunovic (IPK-Tm), the other Chinese Cui Yuampu (Energy-Tm) and the South African Troy Snyman (Energy-Tm). Giacomo Maman (Parolin-Tm) completed the top ten. 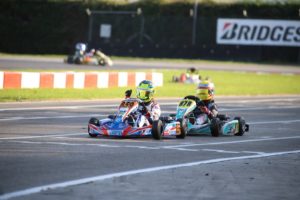 In the Regional Championship the title went to Davide Bottaro (Energy-Tm) thanks to the winning results in the previous tests, and he finished ahead of Emanuele Olivieri and Filippo Pola.

ENTRY LEVEL. At Entry Level, which saw 17 very young riders at the start, the victory was won by Pietro Bagutti (Energy-Lke) on Zheng Kwan Ho Kings (IPK-Lke) and Giacomo Giusto (Energy-Lke). The title in the Regional Championship was won by Filippo Pancotti who had already closed the first position in the standings in his favor. Bagutti placed second, with Francesco Koci third. 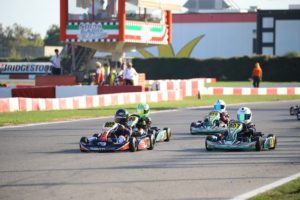 KZN UNDER. In KZN Under Matteo Dondi (Intrepid-Tm) confirmed himself as the fastest in the Final after having recorded the best time in practice and the victory in the Prefinal. In Finale Dondi he established himself on Riccardo Lucini (TB Kart-Tm) and Andrea Pastorino (BirelArt-Tm). Cesare Bonini (Energy-Tm) and Cristian Cobellini (VRK-Tm) ended in fourth and fifth position. 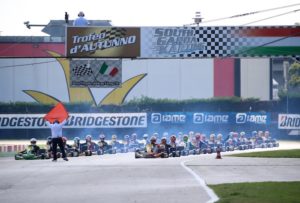 The Regional Championship was won by Dondi with a good margin over Bonini and Pastorino.

KZN OVER. In KZN Over he dominated Marco Pagani (Parolin-Tm), author of the pole position in the test, the victory in the pre-final and then in the Final where he imposed himself on Cristian Griggio (Maranello-Tm). In third position Fabio Danti (VRK-Tm) concluded. The Regional Championship was won by Michele Bresaola (Tony Kart-Tm), fifth in this race, with Fabio Danti second in the overall standings and Roberto Avanzato third. 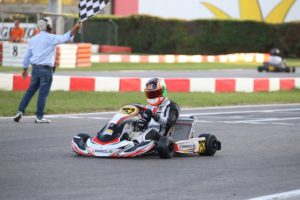 X30 MINI. In the X30 Mini it was the foreign pilots who got the better, with the victory of the Slovenian Mark Kastelic on the Arab Emirates rider Rashid Al Dhaheri and on the Panamanian Sebastian Ng. In the fourth and fifth positions Leonardo Dal Col and Riccardo Nostran ended, all on Parolin-Iame. 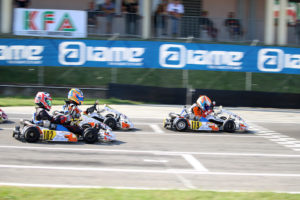 X30 JUNIOR. In the X30 Junior Nicholas Pujatti took the victory in the Final after overcoming his team mate Joel Bergstrom in the last few laps, both on KR-Iame of the Team Driver. In third position was placed Valerio Rinicella (Parolin-Iame) of the AV Racing team who had taken pole position in practice. The Iame Series Italy X30 Junior Trophy still managed to win him Federico Rossi (Tony Kart-Iame) although he was forced to retire in the final, in second place finished Pujatti, third Andrea Barbieri. 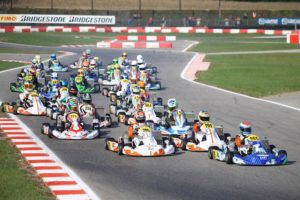 X30 SENIOR. n the X30 Senior he dominated Danny Carenini (Tony Kart-Iame) of the Auto-European team since the qualifying tests and winner also in the batteries. In the Final Carenini always led in the lead to win the victory ahead of Leonardo Fornaroli (KR-Iame) and the Italian champion Edoardo Ludovico Villa (TB kart-Iame). In the other top positions Cristian Comanducci (Tony Kart-Iame) finished fourth and Luca Bertonelli (KR-Iame) finished fifth. In the Iame Series Italy X30 Senior Trophy the overall victory went to Villa in front of Carenini and Vittorio Maria Russo who finished sixth in the Final. 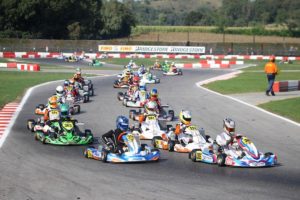 X30 MASTER. The X30 Master saw the domination of Riccardo Pini (TB kart-Iame), winner of the Final after having imposed himself also in the Prefinal and in the qualifying tests. In Finale Pini preceded at the finish line the Polish Adrian Marcinkiewicz (Kosmic-Iame) and Valentino Fornaroli (KR-Iame), while in the fourth and fifth position Marco Bombace (TB Kart-Iame) and the Finn Arto Sainio (Haase-Iame ). The Iame Series Italy X30 Senior Trophy was won by Gianni Zani (BirelArt-Iame) despite being forced to retire in the Final. Andrea Monaci (KR-Iame) and Alessandro Pandolfi (Top Kart-Iame) were placed in the second and third place in the standings. 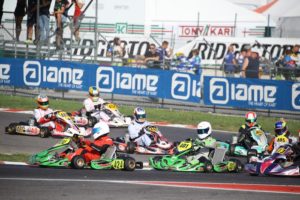 KFA NATIONS CUP. To complete the event of the first Trophy of the Trofeo d’Autunno were the historians in contention for the KFA Nations Cup, with 47 drivers at the wheel of the legendary 100cc karts of the nineties.

Before the final, the Finale-B was held, which saw the victory of Alessio Piccini (Tony Kart-Vortex) over Danilo Scuto (Pcr-Vortex) and Vincenzo Campo (Pcr-Pcr). 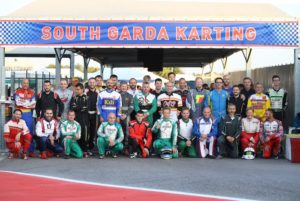 In the Final Final held at the end of the day, the absolute victory went to Daniele Vezzelli (Tony Kart-Iame), who was always ahead of the race where he finished ahead of the promoter and creator of the initiative, Luca Corberi on Tony Kart-Vortex. Among the fastest also the Englishman Neil Mckernan on Tony Kart-Iame, best time in testing in the Series-2 and third at the finish line, which went on to complete the podium of the overall and Pre 2000 class.

The Danish Jonas Willadsen (Pcr-Pcr) finished fourth overall, ahead of the world champion Alessandro Piccini (Tony Kart-Vortex) who established himself in the Over 40 class. To gain the podium of Over 40, behind Piccini with the second place is the Greek Kostas Maitos (CRG-Vortex) and with the third Andrea Barani (Pcr-Pcr). The special Pre2000 Plus classification saw the success of the English Gary Watling (Tony Kart-Italsistem) on the Brazilian Felipe Braga (Tony Kart-Crg).

All results on the site www.southgardakarting.it

Next meeting on October 5-6 for the final of the 29th Autumn Trophy, the national and Rok Cup categories in the race