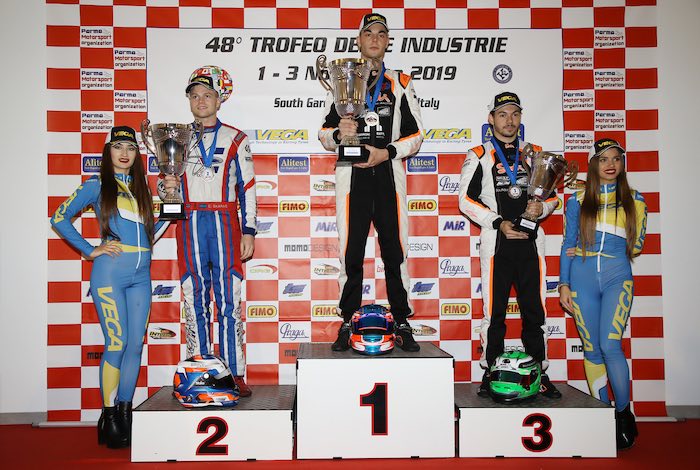 The 48th Trofeo delle Industrie has lived a very difficult edition due to the rain that  made things tricky in qualifying practice and heats on Saturday and on Sunday, November 3rd, when the track was soaked for the final stages of the event organized by Parma Motorsport at the South Garda Karting Circuit in Lonato.

Among the 247 verified drivers out of the entered 253 coming from 42 different countries, the main protagonists of the event have been rain masters like Lorenzo Giannoni who competed for Team CPB Sport on Sodi-Tm-Vega in KZ2, the Dutch Dilano Vanthoff of Team Forza Racing in OK on Exprit-Tm-Vega, Alessandro Cenedese of Team Driver Racing Kart in OK-Junior on KR-Iame-Vega, the Russian Kirill Kutskov of Team Energy Corse in Minikart on Energy-Tm-Vega and Danny Carenini of Team Autoeuropeo Motorsport in Iame X30 Senior on Tony Kart-Iame-Komet.

The five winners of the corresponding categories have been very skilled in mastering the driving on the wet, even when the racetrack was soaked during the Prefinals on Sunday. Clouds opened up a bit for the finals, but the circuit has been wet despite the tarmac drained the water very effectively.

Giannoni the “rain master” in KZ2 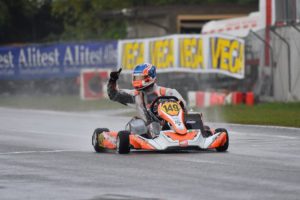 In KZ2 Lorenzo Giannoni on Sodi-Tm has been the unquestioned “rain master” of the 48th Trofeo delle Industrie. He took the pole position in qualifying, won the heats, dominated the Prefinal and the Final. He was joined on the podium by the European Champion Emil Skaras on Energy-Tm and by team-mate from France Jean Nomblot. Manuel Cozzaglio secured an excellent fourth place on BirelArt-Tm run by Team Vzeta,  while the fifth place went to another team-mate of Giannoni, the Russian Artem Kosarev, as the sixth went to Fabian Federer at the end of a comeback-race on Maranello-Tm fielded by team SRP Racing Team. Lorenzo Giannoni won also the “Memorial Carlo Fabi”, the trophy for the driver securing the best overall result in 60 Mini, OK-Junior, OK and KZ2. 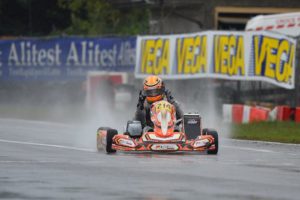 In OK the Dutch Dilano Vanthoff won all what was up for grabs on his Exprit-Tm. He posted the pole position time, won the heats, the Prefinal and then the Final leading another great racer like the Russian Kirill Smal on Tony Kart-Vortex run by Team Ward Racing and the Spaniard Genis Civico Espona on CRG-Iame of team CRG. The fourth position went to the Swede Norton Andreasson on Tony Kart-Vortex, who led the other Swede Theo Wernersson on Kosmic Tm, while Enzo Trulli saw the podium slip off his hands and had to settle for P6 on his KR-Parilla. 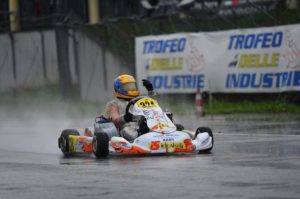 In OK-Junior Alessandro Cenedese on KR-Iame saw the pole position slipping away from him, but the Team Driver’s racer bounced back from P3 winning two heats, before claiming some further wins in Prefinal and Final. Cenedese won the race valid for the Trofeo delle Industrie from his Norwegian team-mate Martinius Stenshorne, to the Russian Artem Severiukhin on Tony Kart-Vortex, while the Australian James Wharton lost the third place due to a penalty on Parolin-Tm, as the Spaniard James Wharton on FA-Iame and Brando Badoer on KR-Iame followed. 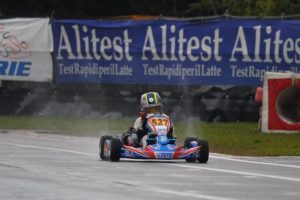 The young Russian Kirill Kutskov won Minikart  on Energy-Tm. He dominated the scene since qualifying practice, but in the Final he had to battle especially with United Arab Emirates’ Rashid Al Dhaheri on Parolin-Tm, as the latter managed to place his kart in front of Kutskov’s in more than one occasion. The Russian eventually managed to cross the finish line on top. The third and fourth place went to two other Russians, German Foteev and Dmitry Mateev, that are Kutskov’s team-mates. The fifth place went to the Austrian Kiano Blum on Parolin-Tm, who led the great driver from Chile Nicolas Ambiado, also on Parolin-Tm. 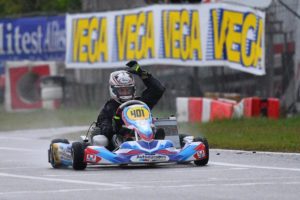 Danny Carenini had the upper hand on all his rivals in Iame X30 Senior on Tony Kart-Iame of Team Autoeuropeo. He claimed the pole position, won the heats and then Prefinal and Final. He has always been confident in his capabilities and the undisputed leader of the category. In the Final, Carenini led Edoardo Maccari on Intrepid-Iame, Alex Machado on Tony Kart-Iame, the Pole Maciej Szyszko on KR-Iame and Mattia Ingolfo on KR-Iame, who took Edoardo Ludovico Villa’s place on TB Kart-Iame when the latter was handed a time penalty. This win earned Carenini also the “Iame Series Italy X30 Senior Trophy” that combines the classification of the Andrea Margutti Trophy and the Trofeo delle Industrie.

The complete results are available at  www.trofeodelleindustrie.it.