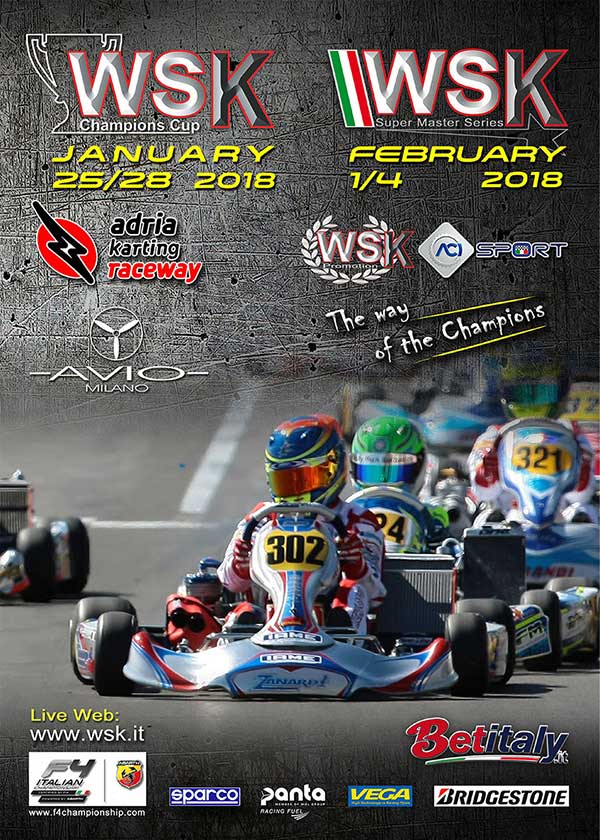 The WSK Champions Cup at the starting blocks with 220 drivers from 38 countries in the provisional entry lists. The first event of 2018 international karting will get underway from January 25th to 28th at the Adria Karting Raceway.

International karting to kick off from Adria with the WSK Champions Cup.
The international karting season will resume from Adria, the venue that is set to host the opener of the 2018 season: the first flier announces in fact the WSK Champions Cup, the single round event that once again will attract the main international teams to the Adria Karting Raceway. The Italian circuit will kick off the events by WSK Promotion with the first of the nine rounds to be held on the main Italian circuits.

200 drivers already in the provisional entry lists.
With a few days left to join, the provisional entry lists feature a total of 220 drivers, all set to get to Adria from one of the 38 represented countries of 4 Continents. This event is the best possible opener, as several protagonists have already been active at the circuit of Adria, that will be at the heart of international karting for the next three weeks: the Italian circuit will be busy starting from this weekend with collective winter tests. The first racing weekend to be held on January 28th will then be followed by the first round of the WSK Super Master Series, from February 1st to 4th.